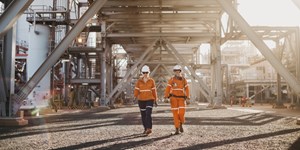 (Bloomberg) –Woodside Petroleum is in advanced talks to buy BHP Group’s petroleum division for about A$20 billion ($14.7 billion), the Australian Financial Review reported on Sunday, citing people familiar with the matter.

Under Woodside’s proposal, the company would offer shares to BHP for the entire petroleum business, which would then be passed on to BHP’s shareholders, to ensure no change of control, the newspaper reported. The acquisition would make Woodside the clear No.1 player in Australia’s oil and gas sector, according to the report.

The talks are ongoing and nothing has been agreed, AFR reported. The companies declined to comment to AFR. Last month, Bloomberg News reported that BHP Group was considering getting out of oil and gas in a multibillion-dollar exit that would accelerate its retreat from fossil fuels. A BHP spokesman declined to comment on the report.

While BHP has long said the oil business was one of its strategic pillars and argued that it will make money for at least another decade, the company wants to avoid getting stuck with assets that would become more difficult to sell as the world tries to shift away from fossil fuels, people familiar with the matter told Bloomberg News last month.

Getting out of both thermal coal and petroleum would help BHP make its case to investors as a company geared toward commodities of the future. The miner is also expected to shortly approve a giant potash mine in Canada which could make it a key supplier of the crop nutrient once production begins.

BHP is scheduled to report annual results on Aug. 17.