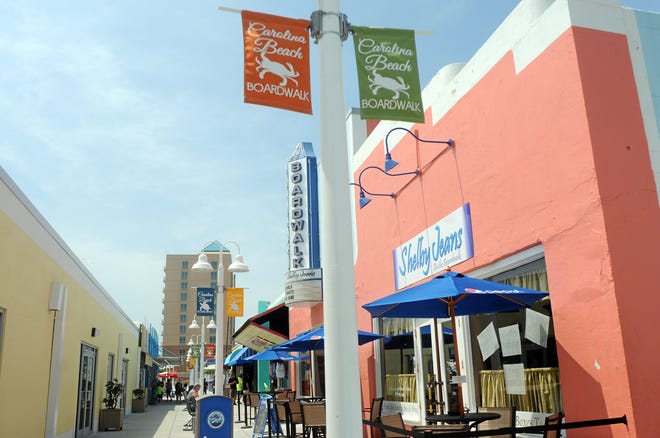 The town of Carolina Beach is working to reconfigure its budget after a proposed municipal service district was rejected Tuesday.

The municipal service district would have added a tax of five cents per every $100 of valuation to property owners along the Carolina Beach boardwalk and marina. The measure was rejected on a 4-1 vote with council member Lynn Barbee voting in favor of the district. The district was proposed as part of the town’s budget and would bring in an estimated $70,000.

The town currently spends more than $200,000 each year providing services to the boardwalk area alone. Those services include pressure washing sidewalks and providing an increased police presence, among other things, according Carolina Beach Town Manager Bruce Oakley.

Establishing the municipal service district could help the town recoup some of those funds, Oakley said. Money could also be used to make improvements signage, lighting and other infrastructure in the area.

Under state statute, the money raised through the municipal service district would need to be invested in the area, which is bounded by the boardwalk and Lake Park Avenue to the east and west and Hamlet Avenue and Pelican Lane to the north and south.

During a public hearing held Tuesday, residents and businesses owners pushed back against the proposal, questioning its timing during the COVID-19 pandemic and a lack of communication from the town.

David Cole, the owner of Hurricane Alleys, was notified of the new tax in May via a letter from the town. He said he wishes the town council would have talked about the proposed tax with business owners in the area before including it in the proposed budget.

The tax could hurt boardwalk businesses who are still working to bounce back from the impact of COVID-19-related shut downs, Cole added.

“The businesses in this district are the ones that got hit the hardest last year,” he said. “We were the first ones to get shut down and we were the last ones to open back up.”

In May, Cole collected the signatures of more than 50 managers and business owners who he said opposed the new district. Cole said he’s also worried that the district’s tax rate could increase year after year because there is no cap on how high the taxes can be raised.

Jeanie Shaffer, the owner of Latella Gelato, said that in addition to recovering from COVID-19 shutdowns, boardwalk businesses are struggling with staffing shortages and supply chain delays — things they’ve never dealt with before.

“We’re trying our darnedest stay in business, to make sure that our tourists are happy, to make sure that we can be there in the long run for the entire year,” Shaffer told the town council on Tuesday. “We are struggling through so many different things that we’ve never had to struggle for.”

The added tax will make running a business more difficult in the off-season. Many businesses in beach towns like Carolina Beach depend on the money they make in summer to survive during the winter, said Ed Thomas, the owner of Gulfstream Restaurant.

“I think the misconception a lot of times is people come in the summertime and see the businesses thriving for three months out of the year,” he told the council. “They don’t understand the struggles we have during the wintertime also.”

The municipal service district tax would be an added drain on those resources, Thomas added.

Following the public hearing, some members of the town council acknowledged the town did not introduce the measure in a way that helped inform businesses about what a municipal service district is and how it impacts them.

“The long and the short of it is our communication with residents was not on point,” said town council member Steve Shuttleworth.

Still, there appears to be support among some council members for establishing a municipal service district in the future. Town council member Jay Heely said while no one likes taxes, the district could help give boardwalk business owners a voice.

But the next time it’s considered there needs to be more dialogue with business owners in the board walk area, said Steve Stefanovich, the president of the Pleasure Island Chamber of Commerce.

The rejection of the municipal service district leaves an approximately $70,000 hole in the town’s budget. Oakley proposed filling the budget hole by raising property taxes from 21.5 cents to 21.75 cents per $100 of valuation.

A motion to approve the budget with the higher tax rate failed Tuesday on a 3-2 vote. The council unanimously approved tabling the budget until a special meeting on June 15 at 6:30 p.m.