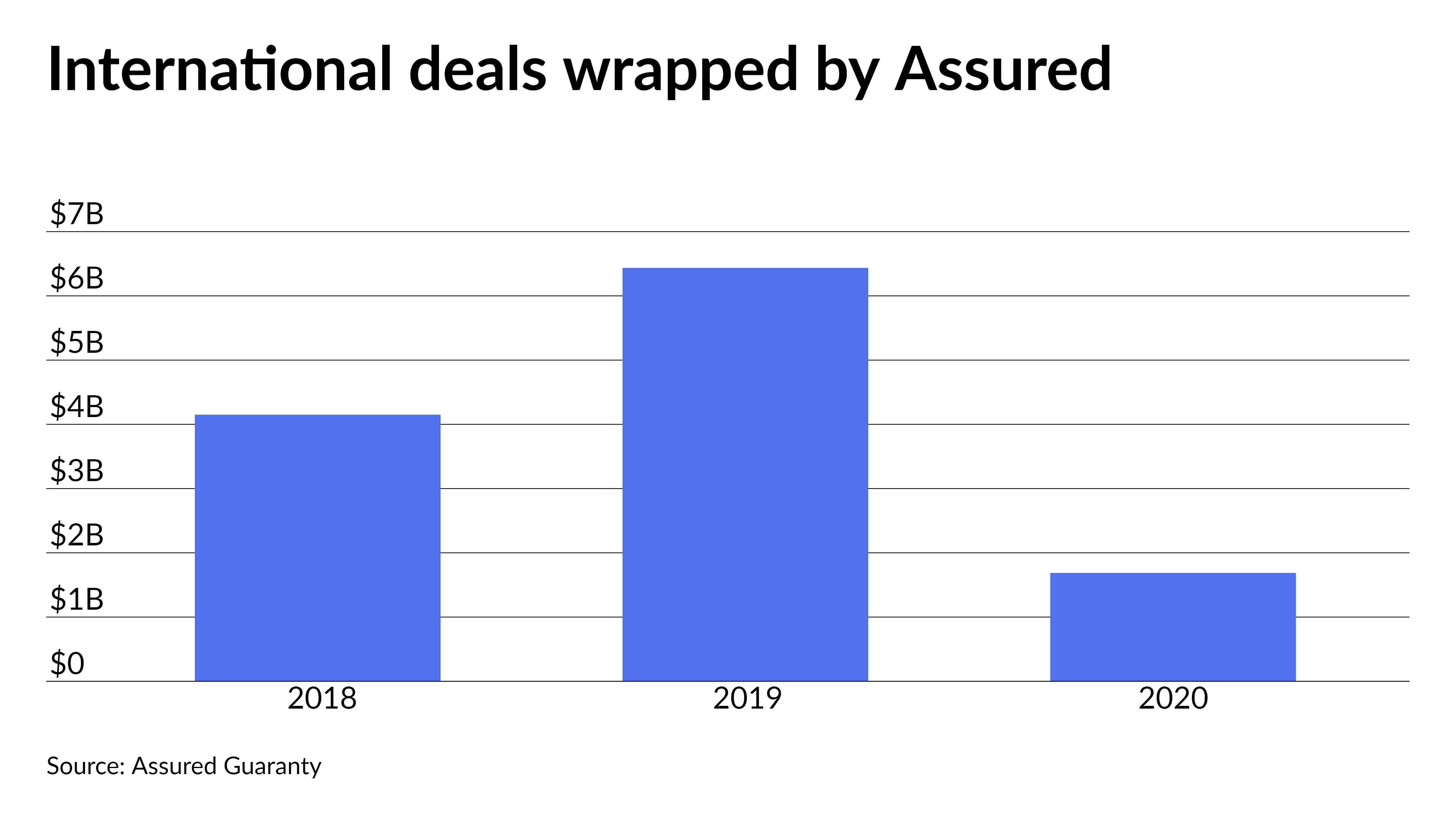 Bond insurance has seen a spike in usage over the past two years domestically and was also increasing internationally until COVID-19 curtailed business.

Assured Guaranty’s non-U.S. subsidiaries have written guarantees for sovereign, municipal and public infrastructure financings outside the United States since 1994 and is looking to grow that part of its business as infrastructure investment opportunities around the globe also expand.

“Our portfolio of non-U.S. infrastructure insured obligations has a long record of reliable performance, and this has continued to be the case in the past year-and-a-half, even with the pandemic,” said Nick Proud, senior managing director of Assured Guaranty’s international and structured finance businesses. “This current environment has demonstrated the robustness of the core infrastructure sector. Most of our international projects are [public-private partnership] transactions, but we also have a number of recent student accommodation transactions which have had greater scrutiny but, in our view, remains very robust despite the pandemic.”

Florence Carasse, senior debt origination manager at Pension Insurance Corporation, who was involved in the Spanish solar deal as one of the investors, said that PIC is very selective in their choice of long-duration wrapped transactions as they fully underwrite the underlying credit.

“The wrap and the role that Assured played is useful from a risk-management perspective both in terms of rating stability but also the day-to-day deal management,” she said, noting that bond insurance helped PIC as a “first step” into entering a new jurisdiction — such as the Spanish regulated solar sector.

“We enjoyed working as ‘co-lenders’ with Assured who brought the deal to UK institutional investors like us,” she said. “As we became more familiar with the market, we were able to take such risks directly and became more selective in our usage of the bond insurance product. The decision to use this type of product became more driven by its relative attractiveness from a rating and pricing point of view.”

Similarly to the insured municipal sector, Carasse said it is important to note that PIC never fully relies on bond insurance alone and they always make sure they are comfortable with the underlying credit risk of the investment.

“For instance, we target a rating of at least BBB flat on the underlying asset and benefit from market standard protections when it comes to the credit quality of the bond insurer,” Carasse noted.

The bond insurance industry pre-Great Recession clearly was quite different than the current environment where just two municipal insurers do business. Back in 2007, seven triple-A bond insurers and at least nine players were writing new business, and up to 57% of newly issued municipal bonds carried insurance in the years before the global financial collapse swept away most of the insurers. The seven insurers with AAA ratings from S&P in 2007 were: Ambac Assurance Corp., Assured, CIFG, FGIC, FSA, MBIA and XLCA.

“There are several insurance companies, who are no longer around now, who were not able to survive through the Financial Crisis because of some of the risks they took on,” said Tom Kozlik, head of strategy and credit at Hilltop Securities. “I am not saying that is going to happen this time around, but the insurance landscape looked much different 20 or so years ago.”

Bond insurance domestically has seen an uptick in usage over the past year and a half, partly fueled by COVID-19 credit concerns and the growth of taxable bonds that have taken a larger share of total municipal volume and opened up the investor base internationally.

When it comes to seeking for additional opportunities in other areas of the world besides Europe and South America, Assured Guaranty said that it remains quite cautious, so for now the only other countries where they are actively seeking new business are Australia and New Zealand. The company said they look for highly rated democratic countries that have a similar rule of law to the U.S. or the U.K.

The other active municipal bond insurer, Build America Mutual, is not departing from only insuring domestic U.S. bond issuers.

Over the years, Assured Guaranty has been open to guaranteeing in the U.K. and most of Europe, Australia, and New Zealand and through AGM in the U.S. they cover certain transactions within the Latin American region.

According to the company, those are the areas they are focused on for now.

“We executed a number of significant transactions last year, including three solar energy transactions in Spain and a student accommodation financing for Kingston University in the United Kingdom, and we have also developed a strong pipeline for 2021,” according to Dominic Nathan, managing director, Assured Guaranty UK Limited. “The pandemic delayed several opportunities last year, but our flow of business has proved resilient.”